Addis Ababa was founded by Emperor Menelik II, who relocated his capital from Ankober to the Entoto Hills in the early 1880s. Following the unusually cold and wet rainy season of 1886, the royal entourage set up temporary camp at the lower-lying Filwoha Hot Springs, largely at the urge of Queen Taitu, who loved its steamy natural baths and christened the site Addis Ababa (New Flower). By the mid-1890s, the new imperial palace at Addis Ababa comprised a 3km² compound enclosing 50 buildings and housing 8,000 people, while the Saturday market near present-day St George’s Cathedral drew up to 50,000 people. In 1900, lack of firewood in the immediate vicinity of Addis Ababa prompted Menelik II to consider relocating his capital to Addis Alem (New World), a plan that was scrapped when it was discovered that the Entoto Hills provided ideal conditions for the fast-growing eucalyptus tree, an import from Australia.

The capital’s development was bolstered by the arrival of the Djibouti railway in 1917 and an associated influx of Armenian and French traders, as well as by the drive for modernization, following the coronation of Emperor Haile Selassie in 1930. Addis Ababa was chosen as the base for the UN Economic Commission for Africa (UNECA) in 1958, and five years later it was made headquarters of the Organization of African Unity (OAU), now the African Union. The city’s population has grown from around 100,000 at the time of Menelik II’s death in 1913 to almost four million today. 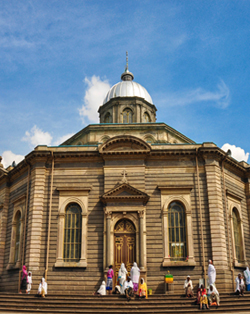 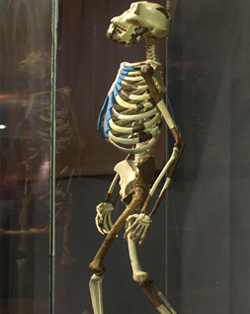 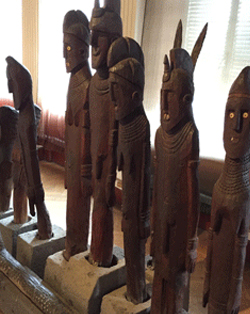 Wonchi lake is a crater lake which located on the mountain range between the town of Ambo and Woliso. This beautiful lake is situated at altitude of about 3000m above sea level. Wonchi contains hotsprings, waterfalls and breathtaking valleys and scenery. In the island, an old monastry named Cherkos is found.

Although no trace of the 13th-century monastery remains (a casualty of the Muslim–Christian Wars), the modern site is impressively set beneath a waterfall-rich cliff (many of the monks live in caves up there) on the edge of the large Jemma River Gorge and is a peaceful place to wander. The present church was built in 1961 by Haile Selassie, against the wishes of the local priests, after hearing a prophesy that a new church would ensure a long reign.

The church is monumental and pretty awful on the outside, but the stained-glass windows are attractive.

Debre Libanos has one of the most interesting church museums in Ethiopia. Besides the usual ecclesiastical items there are Italian guns, giant cooking pots, crowns of past emperors and their wives, musical instruments and an old wooden shackle. Fifteen minutes up the hill from the monastery is the cave of Tekla Haimanot (the monastery's founder), where the saint is said to have done all his praying. It’s also the source of Debre Libanos' famed holy water.

Little is known about the constructors of these monuments, or the meaning behind the stylised swords, unadorned circles, leaf-like symbols and other features engraved upon them, but they are the remains of an ancient Ethiopian culture.

Adadi Maryam is easily visited en route to Tiya, along with the Melka Kunture Prehistoric Site, where a museum documents the many important fossils and Stone Age artefacts uncovered there.

Protected by imperial decree since the 15th century reign of Zara Yaqob, Menagesha is the most substantial indigenous forest in the vicinity of Addis Ababa

Easily visited en route to Menagesha, the Born Free Sanctuary doubles as a natural refuge for indigenous birds and small mammals, and a shelter for rescued and orphaned animals, notably some impressive Abyssinian lions.

Situated only 50km southeast of Addis Ababa along the new three-lane Adama Expressway, Bishoftu - formerly Debre Zeyit - provides an attractive rustic overnight alternative to the capital for eastbound or southbound travellers. Seven beautiful lakes surround Bishoftu. This well-equipped town’s main attraction is a quartet of beautiful crater lakes set within steep volcanic calderas whose rims are lined with resorts catering to all tastes and budgets. Lake Bishoftu lies no more than 500m south of the main road, and forest-fringed Lake Hora is set in twin craters immediately north of the town centre. Kuriftu and Babogaya are also attractive lakes with accommodation and entertainment. On the west side of Bishoftu, a non-volcanic lake called Chelekleka often hosts large numbers of flamingo and pelicans, and thousands of migrant European cranes overnight there from November to February. 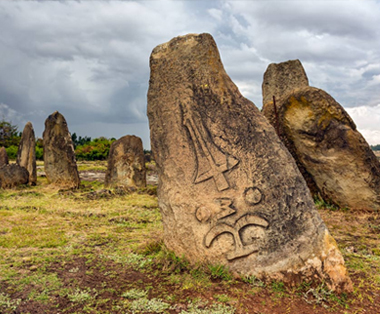 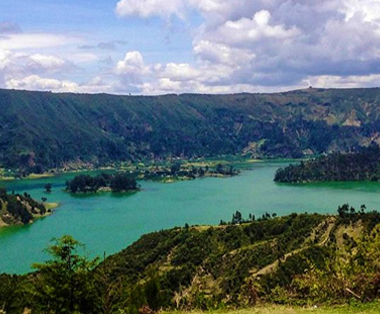